Things I Wished I Had Remembered To Blog About

I am back from my business trip and settling into a Friday night of catching up. YG is out grocery shopping (his week) and MG is in bed reading Beverly Cleary with a flashlight. I would have totally let her read with the light on, but she's very invested in the flashlight idea so go have it. She already wears glasses so I have no worries about stunting her development or anything. I'm all over the place so try and follow along.

1. I wish I could have live blogged my trip back from Orlando because it was weird upon weird upon weird, and I'm sure I've forgotten some of the details. It all started off with my misguided and somewhat insane thought of "I should try and save the company money." WTF? Dumb. I figured that the meals at a Disney resort were expensive so I should try and save money on the trip back. I think this kind of thinking is good when you are the CEO. When you are clawing your way up to middle management? Not so much.

My first mistake was taking a bus to the airport. I told my traveling coworker companion about this, and he immediately thought this was a dumb idea. I was not to be deterred. I had already spent (wait for it) $19 on my ticket and hoped to make the most of it. Only two people got on the bus at my stop so I felt most triumphant. At the next stop, a travel group of about 30 middle-aged women in a wide variety of poly blend "slacks" and "blouses" boarded. They were happy and Southern, and they wanted to talk. And they wanted to talk to me.

My second mistake was choosing a discount airline. Note to friends and family: NEVER choose a discount airline when you are traveling back from Orlando on a business trip. You will be one of few business travelers on the flight. You will spend much time at the check in line as various people attempt to justify that their small moving van is actually a carry-on bag. You may get into an argument with a woman about the size of her carry on bag, or actually, in a rare moment of clarity, you may decline to argue with the woman who wants to know what's in your carry on bag and why it's "approved" for, you know, carrying on. You will hold your tongue, smile, tell her it's regulation size and that it's holding ALL of your items from the past three days. You will not add "unlike your bag which is holding your much needed 'hot rollers' and probably some additional poly blend and white sweat socks from the Faded Glory collection." It will take you a while to get through security because non-business travelers apparently live under rocks these days and don't know all the rules and regulations. And then you'll end up in the last row, seated next to a woman with a small dog under her seat. She may take the dog out on the flight. The dog MAY lick your laptop screen as you attempt to read analyst reports. You may find talking to the lady with the dog more interesting than reading the reports and just give in.

Third was taking the subway home. Enough said. In my own defense, it was rush hour and I didn't feel like sitting in a cab in traffic. Plus, I started a great new book on the plane. I finished Marianne Pearl's book on the trip and was having a minor panic attack at the thought of being on an airplane and having nothing new to read besides work crap and Skymall. Terrified of buying towel warming racks or some Skymall shit like that on the plane, I picked up Evening at the airport. It's lovely. I read over 100 pages on the trip and can't seem to put it down.

2. The Detroit/Yankees game. That was awesome. We had dinner in Manhattan afterwards and given my family's need to make an adventure out of things that shouldn't really be an adventure, we drove all over the place: the Bronx, Bronx to Penn Station, Penn Station to Upper East Side, Upper East Side to the Park, back to UES, back to Park, FDR, GWB and finally a short stop over in the Whip. I miss Manhattan. We need to get back there soon.
And YG didn't die being at Yankee Stadium. Visual proof: 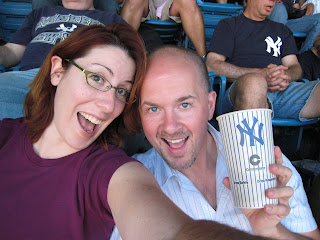 More from the game here.

Note my fancy new green glasses. Wrong prescription that will cost an arm and a leg to change, but I love them.

3. My parents came up the weekend earlier and we took them all around town. The Harbor Islands were gorgeous and the North End was awesome as usual. The night before they got here, I had a lovely Boston evening, walking around town and buying fancy new shoes on Newbury Street and watching a free concert with Fountains of Wayne.
Pictures here.

4. There was other stuff, but there is pie on the table and baseball on t.v. You understand.
Posted by jm at 9:23 PM No comments:

The Happiest Place on Earth

I am on a business trip in Orlando, staying at a resort on the Disney properties. It's surreal, with a weird combination of people in suits and lots of families and more white sneakers and jean shorts that I ever imagined existed. The happiest place on Earth feels slightly depressing when you are by yourself and your dinner plans fall through. I did my work today and then went to the pool and read, and then went to dinner by myself and read. And then I watched the fireworks because I love fireworks and they never cease to make me happy.

If I was a good worker, I would have brought my analyst reports to dinner and read them, but I needed a break, and I can't put down my book.

I'm reading A Mighty Heart by Marianne Pearl, and while I knew how it was going to end -- it's a true story and we all were there -- I still sobbed out loud when she writes about finding out that Danny Pearl was dead. I couldn't help myself. I cried a lot with this one. Highly recommended.

It made me miss YG and the MG more than I already miss them. It's a weird place to be in when you miss your family. As much as I despise Disney and want to rant about their corporate culture and their insistence on marketing crap to kids (Disney Princesses? WTF?), I know that the MG would totally dig this. When I left for the airport, she told me to look for Mickey and to tell him that "MG says hello and that I will come to visit soon." Fuck, man. Who wouldn't be into that?

The plane ride down here was bumpy so I read a lot and then wrote for over an hour. Here's what I had to say about writing:

I used to write a lot more. In college, I filled a journal the same size as this in my semester in London alone. I always carry this journal with me, but I don't have the urge to document everything anymore. Maybe because it's the same old shit I'm dealing with all the time. But I haven't been documenting all the everyday coolness of living in Cambridge and the people watching in Davis Square.

I'm taking a creative writing class in the fall and I'm excited and nervous at the same time. What if I suck? The last time I took a writing class was Writing Studio in London, well over 10 years ago, and I had Jane and at least some of the class convinced that I was a good writer, and even better, a funny writer. Was that talent? Or just that rare occurence of being suitably charming and funny at the right place and dtime? And already I'm getting ahead of myself because I took the class to get into the better practice of writing and not to impress anyone. I just want to do it. Be forced to put pen to paper and come up with something with a beginning, middle and an end. That isn't a journal entry on a plane or a blog entry.

The blog thing is just weird. I read tons of them and am practically obsessed with some. And I'll see these things on the street or I'll have an interesting conversation with someone or see something funny, and I think, "hey, I should blog about this." Yes. And then I die from the weight of my self-importance.

I guess I'm looking forward to being held accountable for my writing. In Writing Down the Bones, one of my favorities, she talks a lot about just putting it out there and writing to write-- that eventually it will find some shape eand flow, or that maybe there will be a kernal of something that you can use later on. And yes, maybe. I'm thinking of all those old journals, diligently kept from age 10 to now. Over 20 years. There has to be something in ther somewhere.

It's very weird to type from a journal. The awareness of my bad grammar and spelling is great, as is my urge to edit. RESIST!
Posted by jm at 10:20 PM No comments: