Good Reads: The Mommy Myth: The Idealization of Motherhood and How It Has Undermined All Women

I'm keeping with my tradition of reading controversial books about five years people have stopped talking about them. I just finished The Mommy Myth: The Idealization of Motherhood and How It Has Undermined All Women, and while it's a few years old, I still found it relevant.

Or maybe these perfect mommy/insane momism/superwoman books are appealing to me right now because they meet me where I am. Very much in the middle of trying to make sense out of this whole parenting, career, want-more-now thing.

* The look at how government has played a role in creating the conundrum that almost all women find themselves in is fascinating. I learned way more than I ever knew about the history of the childcare debates, the original hearings on FMLA and just how shitty the Reagan Administration really was.

* Similarly, the chapter on welfare mothers was also fascinating. Just a few quotes

"One of the most important trends that we found during this period was that the attacks on the maternal qualifications of welfare mothers increased, over the years, in direct relationship to the increased emphasis on the new momism. There is little doubt that for working mothers, espeically white working mothers, these highly negative portrayals of welfare mothers enhanced our own self-esteem at a time when we, too, were very much under attack...In other words, the stereotype of the lazy, irresponsible, neglectful, and promisicous welfare mother became so important in the 1980s and beyond because however insecure we felt in our identities as 'mothers,' we suddenly (if briefly) felt very confident and virtuous when juxtaposed to this other, bad mother."

* The chapter on marketing to children is chilling, especially when I look back on my own childhood and remember the toys that I begged my parents for. My childhood was when target marketing was really taking off, and it's frightening to see how I, and all of my friends, fell and continue to fall for it.

* Given that I was pregnant not that long ago, the chapter on parenting trends and the commercialization of pregnancy are riddled with underlines. I LOVE that they describe that fuck Dr. Sears as the Dr. Laura for the high-achieving, educated set (fell for that shit too), and describe how different parenting "fads" have changed in just the last decade.

What Was Sort of Meh About It:

* The book is billed as a pop-culture critique of new momism in the media, but I found the chapters on media fairly boring and lackluster. This may have more to do with the time lapse (does anyone even remember thirtysomething?), but the television and advertising critiques weren't in depth and the authors didn't really explore WHY women are so susceptible to these images.

* Very long and dense. I started this on Thanksgiving weekend, and just finished. It's not exactly a page turner.

* The tone is pretty snotty and arrogant. It sounds like me, and not in a good way.

* Like most critique books, the "so what do we do about it" question remains largely unanswered. There's a rah rah ending about confronting the new momism when you see it, but given all the interesting information on how our government plays such a HUGE role in devalueing women and children, I would have liked to see more about how to get involved.
Posted by jm at 1:44 PM 1 comment: Links to this post

I spent most of my morning avoiding writing like the Plague, lingering at the babysitter's house, grocery shopping (a task I normally loathe) and even venturing into someplace named "The Creativity Craft Store." Clear avoidance. But then I broke out my exercise book and spent a few hours writing, and it feels awesome -- with a minor stopover in Guilt land because everybody else at work is so busy.

And then I remembered: I DO NOT GET PAID TO WORK ON FRIDAYS.

Anyway, I loved this:

So we're all floating around in a state of confusion and insecurity, looking for publication as our only real measure of success and validation. And because so few people get published, and even fewer then go on to making any real money, are we all failures? Are none us writers? Are we all wanna-bes?

Tricky question. I have long defined myself as a writer, before I got anything published, before I got an agent, before I made a dime. I have known I was a writer since I was twelve, maybe even before that. And how? Because I didn't want to do anything else but write. All I wanted to do was write, ever, always, and amen.

I guess that we are writers if we write, if we write all the time, if we improve, and if we want to do it more than anything else. I'm not absolutely positive, but I believe that I am a writer. And today, if you are writing and not looking back over your shoulder too often, you can be one, too. -- Caroline Sharp

Well, then.
Posted by jm at 1:28 PM No comments: Links to this post 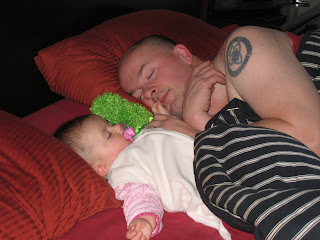 Posted by jm at 8:33 PM No comments: Links to this post

Our pastor friend, Dan, told this story in a sermon on Sunday. He was having food and drinks with Peter Gomes, and he asked Gomes what he thought the key message of the Gospel was. Without missing a beat, Gomes said, "you do not have to be as you are."

Regardless of your faith or nonfaith traditions, there's got to be something comforting about not always having to be "as you are," no? That you can be who you were intended to be.

I like this very much this week. I've got a bunch of work piling up and I am trying very hard to not be me, and to spend my time not there very much here with this cool kid I've got.
Posted by jm at 8:29 PM No comments: Links to this post