Today is the MG's tenth birthday. Ten! I can hardly believe it. When I first met her, she was six and we were in the lobby of a hotel in New York City. YG had taken her there as a present for her impending seventh birthday. She immediately grabbed my hand and asked me to take her to the bathroom. We then went and played on the swings in Central Park and had scones at Alice's Teacup. Two months later, I moved to Massachusetts.

The following year, we went to Cancun. And last year, we celebrated at the bowling alley with her mom, her mom's boyfriend and some friends after YG and I got back from France on our honeymoon. This year, we decided not to do a party. We're taking her on a day trip next weekend, and last night we celebrated with some cupcakes from Kick Ass and steak at Frank's. Today, we went bowling again, this time in Cambridge, because I am too sweaty and unwieldy to really go anyplace else.

She's a great kid. Considering the massive upheaval in her life over the last couple of years, it's amazing she's so well-adjusted. I remember nine and ten. They were the beginning of the suck -- of mean girls and insecurity and raging hormones -- and I remember what an asshole I was to everyone around me. So far, she isn't like that. My birthday wish for her is that she escapes the next decade with as little bruising and scraping as possible, and that she stays happy.
Posted by jm at 3:41 PM No comments: Links to this post

Maternity Leave and Things I Want To Do

I didn't get everything I wanted, but I did negotiate an extra 4 weeks leave unpaid and I am going back at a reduced work week of 32 hours. I'm happy with it, and looking forward to filling that extra day with Zygote and my writing.

In other news, I am sitting on my big, pregnant Orca-like ass, watching the Biggest Loser. These people just ran a marathon. I watch the runners outside every day, remembering last April and my first longer race, and I can't wait to get back out there. Can.not.wait.
Posted by jm at 9:47 PM No comments: Links to this post

In Today's "Are You Fucking Kidding Me?" News

I work in PR so nothing should ever surprise me, but the marketing of America and the marketing of women in particular never ceases to amaze.
Posted by jm at 9:44 PM No comments: Links to this post

I think he or she is just putting on weight from here. 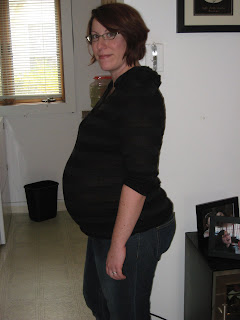 Nice weekend with a visit from my parents, a dinner at Rialto and an early birthday party for the MG.
Posted by jm at 8:00 PM No comments: Links to this post