I hope it's not cheating if I just cut and paste from a mail I sent to a few friends. 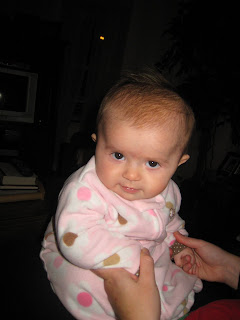 Zyogte turned five months old today. That seems so old. We no longer get "oooh, tiny baby" or "fresh baby" when we go out. She's growing up.

What to say about a baby that doesn't sound like the usual my-baby-is-so-special-and-I'm-so-in-love-with-her drivel that is really only interesting to the parents and grandparents? Nothing, really. I am so in love with her. This is a good age. Our first month was just nutso with the normal postpartum period and the flu and MG's appendicitis and YG's hearing loss and my crazy-ass depression. Once the antidepressants kicked in and she started becoming more aware, it seems like it's been pretty smooth sailing. Or if not smooth all the time, at least we have a mutual appreciation of each other and how much we can piss each other off. So we try to limit bitchfests as best we can.

She is a happy, smiley baby most of the time. She started with the smiles very early, and giggles and talks a lot. I haven't heard a lot of B sounds, but a lot of gahs and cahs. She also discovered how to make this high-pitched shriek that she uses a lot, mainly when talking to her hands. I find it charming, but I imagine it's annoying to anyone sitting next to us in a restaurant. Rich has an easier time making her laugh than I do, and I think it's because of his facial hair and his renditions of songs from the Muppets. She humors me when I sing her Beatles songs, but I can't really get her laughing unless I'm tossing her in the air or really roughhousing with her, and I'm sure there's some book somewhere that will tell me I'm damaging her by doing this.

She has a variety of stuffed animals and toys that she likes, but prefers the smaller ones that can be stuffed in her mouth. One of her favorite games is throwing her binky down, and then picking it up and putting it back in her mouth. I watched her figure this out over the course of several days, and it's much more fascinating than it sounds. She had this look on her face like, "I am such a BOSS right now. Look at me with this thing."

The Exersaucer reigns Supreme. I also tried some Baby Einstein despite my pre-kids belief that babies shouldn't be watching TV. but it just put her to sleep and/or she got much more interested in chewing things. She drools like a Mastiff, and her teething periods SUCK. But she's such a champ the rest of the time that we're handling them okay. By handling them okay, I mean white-knuckling and trying to keep her as comfortable as we can what else can you do?

She's also very active, or as active as you can be when you can't walk or crawl yet. She doesn't snuggle, and never really did when I carry her around, she's always peeking over my shoulder or wiggling around to see where the action is. When we put her on her stomach, she grunts and groans, but she's managed to pull her knees up to her chest already. She definitely wants to move, and she most definitely wants to catch the cat. She does a lot of rolling and jiggling too. I suspect that we're going to need to child proof our place sooner rather than later.

The transition back to work has been about as difficult as I expected. I was feeling very apathetic about my job and my career before I left on maternity leave and I have been itching to do something new. Add the feeling that I'm missing watching this cool kid develop on top of that...hard. My mom lived with us for most of October when I first went back, and it worked out way better than I could have imagined. I seem to regress into a sullen teenager whenever my mother is around so I thought we would spend the whole time fighting. And yes, there were times when I wanted to kill her ("why do you have to talk with your mouth full?," "for the nth time, no, you cannot put a blanket in the crib," and "she is not starving because of breastfeeding.") But I was mostly just grateful to have her around when I left in the morning and came home at night. It was also the first time in my life that I learned more about what it was like for HER working and raising three kids. She also took Zygote to all the historical sites around Boston and developed her own routine with her. Nice all around. Rich's sister is watching Zygote this month, and that's been working out as well. She starts daycare in December, and then I'm hoping that we will finally settle into a routine.

Right now, I nurse her in the mornings twice before I go to work, have my work day, and then rush home to spend some time with her and nurse her again before she goes to sleep. Pumping at work is another thing that doesn't suck nearly as bad as I thought it would. It's not fun, but it gives me some breaks during the day to think about the baby and to try and imagine what I'd be doing if I wasn't working here. I mostly draw a blank, but the pumping time gives me a few minutes to remember exactly why I'm here. Cliché, but true.

I'm not working on Fridays and besides the whole bleeding money thing, I like having that extra day to spend with Imme. I plan to use that day for writing once she is in daycare, but for the past two months, we've been sleeping late, going to the bookstore or the movies, and sometimes taking the T to MGH and running back to Cambridge along the Charles when it's not too cold or windy. There's also a ton of mundane errands to do, but I've been enjoying the time. I still haven't quite come to grips with the fact that I am now a part-time worker and that effectively puts my career on hold for a bit, but see above: not so hot about that career anyway.

Things are good. Looking forward to the holidays and introducing Zygote to Christmas, Italian-style in NJ.
Posted by jm at 5:28 PM No comments: Links to this post