My Impassioned Plea To Save Huge (Or Things I Watched) 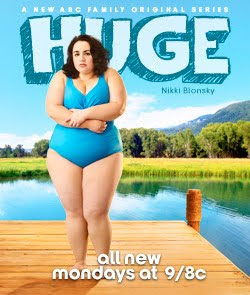 I watch a lot of tv. Or a lot of tv for someone with a job and a kid and a host of other things to do. I rarely watch GOOD tv, though, or something that I get really thrilled about seeing (Rescue Me, being the exception). I began watching Huge this season, mainly because everyone in the Fatosphere was blogging about it. And, oh my god, it was amazing.

The show is an ABC Family network series that focuses on eight kids sent to a summer weight-loss camp, and Winnie Holzman, the creator of My So-Called Life, and her daughter Savannah Dooley wrote the pilot. My So-Called Life was one of those life changer shows, and years later, I sometimes still feel like I am Angela Chase. That show got the horrible awkwardness of the teen years exactly right, and even though there were some other decent shows like Freaks & Geeks about high school, I haven't seen anything else that came close.

Until now. Huge manages to capture the painful and horrendous awkwardness of being a teenager, and because it takes place at a fat camp, there's no token fat person to deal with "fat issues" while the black person deals with "minority issues" and the gay person deals with "gay issues." The cast is incredibly diverse, and because they are all fat, the show allows you to focus on the character development rather than their size.

There are so many things to love about Huge. First, I love that the cast is actually big. Not Hollywood big, but actual large people. This sounds ridiculous to point out (it's a show about a fat camp, after all), but how many times do we see the loveable "fat" friend played by someone who is way smaller than...well, me? Second, the writing is really, really, really good. The characters are multi-dimensional and there is no single "fat issue" to solve. The show covers binge eating, emotional eating, disorders, fat acceptance, and it's all done respectfully. I never got the impression that the writers were making fun of these kids. (For the opposite, see this review of the other "fat" show, Mike & Molly). Third, I love the way the show deals with "the gay character" in that it's never explicitly stated that Alistair is gay, much like it was never stated in My So-Called Life until the end that Ricky was gay. Alistair wants to be Athena and he loves girly things, but the writers never made us sit through a cringe-worthy Very Special Episode: I'm Gay. This seemed much truer to my high school experience where you had gay friends and you were pretty sure they were gay but you weren't sure if they thought they were gay, so you just sort of rolled with it. Fourth*, the adults are real characters too with real problems, and the writers never try to convince you that adulthood is going to be this magical solution for all your fat issues. I won't give away the season ender, but let's just say that it was brilliantly acted.

* I feel like I'm writing a third grade essay with all these "and first," and "second" blah blah.

The future of the show is still uncertain, but I've sent my emails to ABC and joined the Save Huge Facebook page. You should too.

Also, check out this amazing interview with Savannah Dooley. If you don't believe my arguments, this will convince you to watch.
Posted by jm at 8:09 PM No comments: Links to this post

Big surprise -- this made me cry.

Posted by jm at 7:22 AM No comments: Links to this post

Don't Ask How Bad Your Senators Suck, Tell Them

So the move to repeal 'Don't Ask, Don't Tell' stalled in the Senate today. Given the partisanship of late, this is not a big surprise, but still sad and a setback. The blame game has started, but in the opinion of those that matter (read: me), we can blame the Republicans for the filibuster, but let's also leave some flaming bags of poop on the doorstep of Harry Reid, the guy that thought it would be good to play political football with the lives of people that WANT to serve our country in the military. The whole process disgusts me.

I will leave all my 'gays are people too' comments out of this. If you read this blog, you know I support gay rights and you know that you can't convince me that anything less than equal rights for all is fair. Let's just leave that aside. Look at it LOGICALLY. We're fighting two bars. Badly. Our military is overstressed. Our military families are overstressed. Wouldn't it make sense for us to allow people that WANT to join the military to serve their country? Wouldn't it alleviate some of the burden on our existing workforce? Explain it to me.

I am seriously considering writing a letter to my congresspeople for the first time in my life. AFTER I can think of something more coherent to say than, "Fuck you."
Posted by jm at 8:30 PM No comments: Links to this post